The Hipu Hopu yekughetto proponent, T. Gonz, known for his hard hitting ghetto inspired lyrics will share the stage with Rich Nusty Swagga, university and college based Djs and musicians.

Always to be held on the last coldest month of the year, just before Spring, the event has been aptly dubbed Inter Varsity Shake Off Winter Party. It is also happening at a time when students in local universities, colleges and poly have either just finished their end of semester exams or enjoying vacation.

“CYAC has decided to establish an annual blockbuster Inter Varsity Shake Off Winter Party for every year in July. Our events are more than just entertainment. The main aim is to have all tertiary students doing different degree or diploma programmes in Zimbabwe tertiary institutions network and connect while enjoying great music in a purely entertainment venue,” said Mr. Rateiwa.

Turning to critics who associate partying with immorality, Crispen Rateiwa aslo known as R. Crisp pointed out that the shows are for mature people, voluntary and mainly meant for networking with current and former tertiary level students. All those with student IDs will get into the party after paying only a $1. Non-students pay $2.

“Besides dancing the night away, these events spur business engagement and project collaborations among students and general members of society as people discuss business ideas over drinks in a chilled and relaxed manner.  When students from different majors link up and create entrepreneurial friendships it is beneficial to them and the nation,” said Mr. Rateiwa. 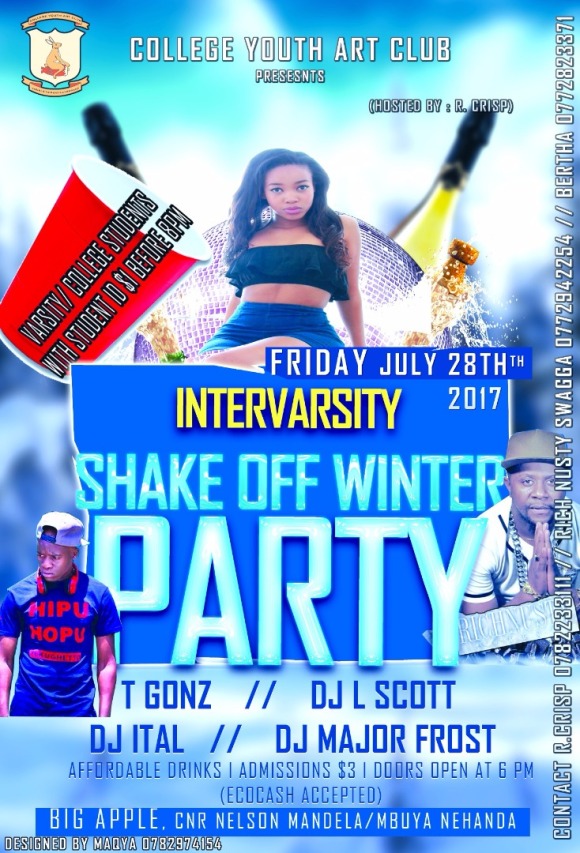 Formed in 2015 at NUST, College Youth Art Club has spread wings to all tertiary institutions in Zimbabwe. It houses literary, performing and visual artistes as well as organising performing opportunities for student artistes so that they supplement living allowances they receive from parents/guardians.

Some of the popular activities that CYAC runs are Going To The Movies, Miss Inter Varsity and many tertiary level themed events.  It also publishes a weekly entertainment guide on its facebook page, http://www.facebook.co/College-Youth -Art-Club-CYAC-TV. Moreover, it is open to partnership with any club or society or company in event planning, coordination, promotion, marketing, management and product or service awareness programs.